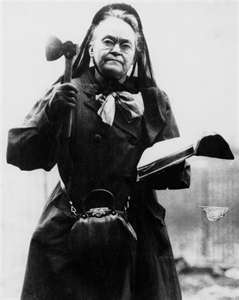 While it is true the Prohibition era was dominated by men, the truth is, there were several women, some famous and some infamous, some on the side of the law and some outside the law, that played very prominent roles. This is one of them.

The first well-known woman to become entrenched in the Prohibition movement was Carry Nation. Some may remember her as a dark soul who dressed in black and carried a hatchet with a campaign of destruction called “hachetation.” But she wasn’t always like that. Here’s a little history you may find fascinating.

Hoping to shift the movement into political activism, temperance advocates backed legislation designed to restrict or ban the sale of alcohol within local communities. In response to these efforts, in 1851 Maine became the first state to outlaw the sale and manufacture of alcoholic beverages. By 1855, thirteen other territories and states followed suit.

Women joined the fray in 1873. Establishing the Ohio-based Women’s Christian Temperance Union (WCTU), the group labeled drunkenness “a national curse” and advocated abolishing the trafficking of alcohol. By holding non-violent protests outside establishments that sold liquor, the ladies were able to close over 25,000 drinking establishments. But for all that losed, more popped up.

As America continued the shift from a rural o an urban lifestyle, slums developed in the big cities. Believing alcohol was major contributing factor in this urban decay, many reformers felt that the poor would be better served by the elimination of this evil brew.

One of the most vociferous women to join the WCTU was Carry Nation. Married to Dr. Charles Gloyd in 1867, Nation discovered her husband to be an alcoholic and experienced firsthand the carnage such a habit could inflict on a family. While pregnant, she separated from Gloyd and returned to her parents’ home where she had a daughter, Charlien. Six months after the child’s birth, Gloyd drank himself to death. This tragic experience led Nation to become a staunch activist in the temperance movement.

In 1877, she married David Nation, a pastor, and the two settled in Medicine Lodge, Kansas. When she learned local saloon owners were violating the Kansas constitutional
amendment prohibiting the manufacture and sale of intoxicating beverages, she organized a local chapter of the WCTU. Entering bars, the group sang hymns and prayed for the souls of the patrons. Eventually, these demonstrations drove the saloons out of business.

But Nation’s nonviolent approach took a 180-degree turn in 1899. Armed with a sledgehammer, she entered a drugstore, the only remaining Medicine Lodge establishment serving liquor, and smashed a keg of whiskey. The proprietor left town, and the WCTU claimed victory.

On a roll, Nation took her campaign into Kiowa, Kansas, a nearby town. Fed up with saloon owners violating the law, she went on a rampage. Using stones, bricks and bottles, she attacked three illegal saloons. Later, she destroyed furniture and mirrors in these same establishments with a hatchet. Her husband pleaded with her to come home, but when she refused, he divorced her on grounds of abandonment.

Carry Nation’s campaign of destruction, which she called “hatchetation,” resulted in 30 arrests and substantial jail time for the former preacher’s wife. And while it initially brought substantial attention to the cause for prohibition it eventually became more of a hindrance than an asset. But before her crusade ended, Nation came to Miami in 1908 to support locals in drying up the “wicked little city.”

Carry Nation at the Casa Loma Hotel in Miami

In a tent pitched across the street from the courthouse, she led enthusiastic supporters in cries to rid the nation of the “devil in the bottle.” Miami’s newspaper, The Miami Daily Metropolis, covered the story and reported that those “who thought Mrs. Nation [was] simply a sufferer from a certain form of dementia Americana . . . are daily changing their opinions.”

While in Miami, a city that banned the sale of alcohol on Sundays, Nation went on an unannounced inner city tour, noting an abundance of crime and corruption. H. Pierre Branning, the county solicitor and future circuit judge, subpoenaed Nation regarding criminal activities in Miami. After questioning, she addressed a crowd of over 2,000 supporters, quoting the Bible on the evils of alcohol and declaring “official corruption had contributed to Miami’s wickedness.”

A perturbed Branning huffed his way to the platform, refuted the allegations and challenged Nation toproduce the evidence. According to the article,“On that cue, she withdrew two bottles of whiskey from the folds of her dress and shouted, ‘ These were purchased [in] north Miami on Sunday.’” Her audience exploded in jeers and laughter.

Nation’s visit to Miami created quite a stir, yet it had a positive effect. In subsequent months, the city experienced an increase in liquor violation arrests and more stringent liquor laws.

Fascinating but little known history is all around us. I write historical fiction and nonfiction about remarkable events in Florida's history. Please join me for a fascinating ride.
View all posts by Sally J. Ling →
This entry was posted in Fascinating Women of the Prohibition Era, Prohibition. Bookmark the permalink.