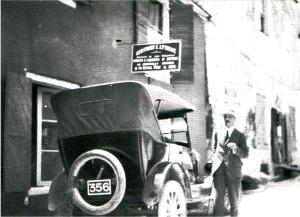 When one walked down the streets of Nassau during the Prohibition era, he or she saw store fronts, like shoe or clothing stores, crowding the streets.  Dangling signs touted the distillary or supplier the proprietor  represented, and inside deals were struck with signatures on a dotted line.  Money, stacks of it, passed from buyer to proprietor all with the purpose of running illegal booze into the U.S.

Just outside Nassau, several 30-foot by 50-foot barges floated on a blue-green bay. It was there schooners, loaded with liquor from English distilleries, docked and discharged their liquid cargo. Bahamian workers, both men and women, carried the cases off the schooners, and with nimble fingers, repackaged the bottles in sacks of six bottles each wrapped in straw.  Called “hams,” these were then loaded onto 25-foot motorboats equipped with powerful engines and capable of carrying 400 cases in one haul. They were bound for Florida.

Fascinating but little known history is all around us. I write historical fiction and nonfiction about remarkable events in Florida's history. Please join me for a fascinating ride.
View all posts by Sally J. Ling →
This entry was posted in Prohibition. Bookmark the permalink.